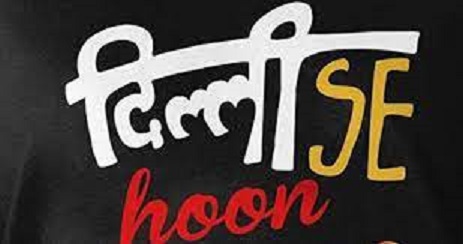 Dilli Dil Walon ki, tu jaanta nahi main kaun hun, Bhai Nahi hai, chal chutiya, bhand, and so forth you probably heard such expressions or slangs if you studied or lived in the capital of the country. Besides its food, winters, and beautiful monuments Delhi is famous for its slang, which makes it remarkable from other parts of the country. Delhiites are popular for their uproarious behavior, flashy lifestyle, and fashionable clothes. Earlier Mumbai was renowned for its tapori language, but now Delhi has its own standard dialect and slang which sets it apart.

People who have come here to study or earning a livelihood may find Dilli slang awkward at first however sooner or later get adjusted to this new language which is a blend of fondness and wilderness.

Here are 10 certain lingos and slangs which atypically screeches “Delhi” and you hear them too often:

The word “Bhaiya” I feel is one of the most favorite word of Delhi girls. And how can we leave guys behind “Bhai Nahi hai tu” is usually used by my men to get their work done. It is used as a persuasion tool. This also encourages brotherhood.

2. Oh, Teri Bhen Chod (BC likhna was like disrespecting the sentiments):

The dictionary of Delhiites is incomplete without the word Bhen Chod. It’s a universal word to depict all kinds of emotions such as happiness, anger, surprise, etc.

Delhi boy can relate to this one. Roaming around without an agenda is known as Gedi marna.

Bad Trip i.e., BT is mostly used by college students. It implies you are stuck in a bad situation or there is a bad feeling attached to it.

The word “Vella” is used for those who have nothing to do. The vella person is always willing to give you company all the time.

It is a common slang used in North India. Chomu is used for someone who is dumb, and also intellectually challenged.

Bhasad means a problem or a serious ruckus. If a Delhiite is in a mess they usually say, bhai bhasad mach gayi.

Chull implies craving for something or restlessness. It is also used in the song, “ladki beautiful Kar gayi chull”.

The meaning of the word is etc etc or blah blah. Delhiites are always in a hurry so they prefer using Falana dhikana.

This is another common slang used by Dilli wala’s. It simply means “Go to Hell”. Bhaad main jaa is also commonly used by Delhiites if they are pissed off with someone.

Goa is a place which everyone in the college inspires to go. Goa Chalte hain is part of every conversation.

Most of the time Delhiites don’t make a plan, they make a scene. If someone wants to go for a movie or clubbing, they will ask bhai sham ka scene Kya Hai? The word scene is also used, when there is a fight between two groups or some mess has happened, Bhai scene ho Gaya.

When someone is high on booze and starts to behave abnormal, people call them bhand ho Gaya saala or Bhai talli ho Gaya.

This is another slang which everyone uses. Goli dena means to lie about something or to escape a situation. When you don’t want to do something and can’t say no  – the best thing most Delhiites do is Goli Dena. Arrey bhai sorry late ho gaya last minute boss kaa call aagaya. What do we reply??? – Bhai Goli Mat De.