A Mother in Law can be a Mother

A Mother in Law can be a Mother 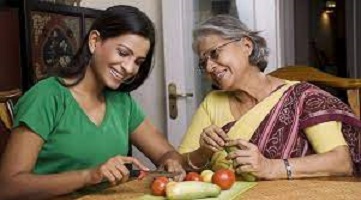 The big day of my life was about to come. I was getting married in few days. There was a mix feeling, part of me was excited and the other part was making me very scared. There were butterflies in the stomach. The intense anxieties were affecting my mind and body both. Everyone told me, it’s very normal to feel scared, especially dealing with situations which are going to change the entire life. I had cold feet and was petrified to change my house, not because I didn’t want to get married but I was scared of this term Mother in Law. I am a very thoughtful, adjusting kind of a person but somehow I was not able to come out of this fact how will I live with my mother-in-law as she is not my mother.

There was a reason I was so fearful, my close friend Shruti who got married 4 years ago is sitting at her parents’ home because she is still not able to get along with her mother in law and his husband is not at all supportive. Things became so worse that Shruti has to go to a psychiatrist for treatment. She got married in April 2016, they were family friends and she knew the guy very well. Shruti was an engineer and was doing well in her career. I won’t say her husband was bad but he will keep quite in all the matters at home.

When Shruti got married and joined back office, she was told by her mother in law to transfer her salary in her (mother in law) account. She was shocked to hear that because her parents never asked her a single penny. Shruti agreed thinking its okay, may be her mother in law manages money in the house but deep down she was very disturbed and her husband kept quite. She was now fully dependent on her for day to day expenses from travel to shopping to waxing. She couldn’t spend single money without asking her.  Every weekend her sister in law came and stays over but Shruti was not allowed to meet her parents who were staying not very far and was told it won’t look nice as sister in law and her husband is staying over (Shruti never had a problem with her coming over but she was not allowed to meet her parents even if they were ill).

Shruti ignored the salary thing but unable to meet her parent was giving pain in her heart. She would always call me and say if my sister in law can come home then why I can’t go and meet my parents. If any point of time Shruti will ask for money to buy gift for a colleague her mother in law will interfere that why you want to give expensive gifts? Why you want to attend birthday party? She would point figure on everything. Shruti felt as if she was falling short of breath and tightness in her chest, the suffocation at her in-laws place was increasing day by day.

Her mother in law was very sweet on the face; even her parents were shocked, that why Shruti says bitter things about her. But her mother law had dual face; she would never let people know that she was controlling her daughter in law. Her mother in law won’t abuse her but she was sarcastic in everything, she will have a problem with Shruti’s cooking, night shifts at work (but she didn’t want Shruti to quit also). Shruti was becoming week day by day because of stress and work load at home. Her mother in law didn’t keep any full time maid (which was a requirement because of long working hours); everyone was doing well in the family. There was a rental income, father in law’s pension, Shruti and her husband’s well paid job. Her mother in law expected her to spend time in kitchen and cook food for everyone and other errands at home, Shruti did all but still there were sarcastic comments with a taunting smile.

The worst part was, her husband could see everything but remain unaffected. Shruti ignored everything thinking things will get better in the future but the controlling nature of her husband was suffocating her every day. One day Shruti kept on crying and didn’t stop, she told me, her mother suffered from heart attack and mother in law is allowing her go to her house and stay until her mother recovers. Shruti was a strong girl with a passion for life but today she looked like a depressed girl who has no hopes to live. I didn’t know what to tell her because soon I knew I will be in the same boat. Shruti left her in laws place and decided she won’t come back ever if this will remain the scenario. I was so excited about getting married but now I was frightened to the core.

The day came when I was to get married to Ram. My mother in law was all smiling and introducing me to everyone (I knew she was fake and soon she will show her real face). I kept on observing her and was thinking soon I will be in the real world. I already hated her and my imagined fear was becoming strong and strong.

I entered the new home and immediately left for my honeymoon. Every time my mother in law will call, I will pretend to be normal but I wasn’t. She would ask me where we had gone; I would take it as an enquiry. If she would ask me what I shopped, I would think that she wants to say don’t spend too much. Each and everything looked pretentious from her side. I came back to my new house (I had still not accepted it as my own house); my mother in law welcomed me with open arms. I could see her fake smile and seemed more concern for her son.

In the evening, we were all having tea together; she and my father in law came to me and said they want to talk something important. My stomach started aching; I knew they would ask for dowry. I started sweating. And then something happened which I couldn’t believe. I was dumbstruck and couldn’t speak a word. She handed me over a key and said it’s a key to your new house, a wedding gift. If you want you can stay with Ram there because now you have more right on him. She said I understand staying in someone else’s house is very difficult and needs a lot of adjustment, so you and Ram are free to move. The house is nearby so we will remain in touch. She even said although if they plan to stay together, they will be very happy and would make few arrangements like full time maid and extra keys if I will be late sometime from work or party.

I was zapped completely; I just started crying and hugged her. I was so formal and distant with her since my marriage and she turned out to be so practical and understanding.  Months and months passed, I learnt lot of things from her; she taught me cooking and also how to handle things with patience. She told me the most important thing treat maids like your family and take care of them. I till now regret for all the wrong thoughts I had in the beginning.