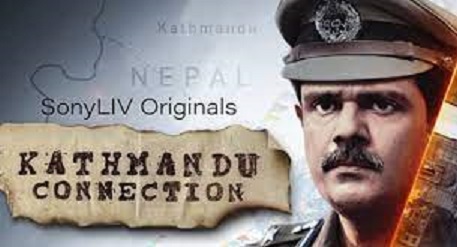 The SonyLIV latest series, Kathmandu Connection is portrayed as a well-tried crime series. The six-episode series, revolves around a Delhi Police Officer, Samrath and Television reporter, Shivani. The series draws attention towards the 1993 Bombay blasts and some real life incidents, that had connection with the bomb blasts. The three incidents were – the murder of the investigating officer in the blast case Sandip Garg, kidnapping of Dharmendra Arora, a businessman and a prominent hotelier and stalking of a well-known journalist, Shivani Bhatnagar. The Delhi Police officer, Samrath Kaushik and CBI officer Hitesh Aggarwal found a common connection to these 3 incidents i.e. Kathmandu. To find out the missing link and tracking the people behind the dreadful crimes Samrath, reaches Kathmandu. Kathmandu Connection, written by Siddharth Mishra and directed by Sachin Pathak’s started with the gripping plot, throwing light on the interrelated felony cases, in connection with 1993 Bombay blast. But, the screenplay missed the gravity and connection, essential to depict such true incidents. The storyline is confusing and pathetic, with so many deliberate twists and turns. The series begins on a propitious note and quite fast paced, but starts to move like a snail to a weak climax. With Amit Sial in the show as a lead, the expectations were high, but the show is full of flaws and loose ends.

There are several diversions from the main storyline – divorce of DCP, a love story, troubled marriage, police officers carrying their own investigations, a Hindu Muslim angle, a story of an orphanage, so many plots in 6 series episode. It seems as if the writer got lost while writing the screenplay. The blemished execution makes the series – Kathmandu connection a loose plot. Even the love scenes are immaturely written.

Anshumaan Pushkar, as Sunny is not at all convincing as a gangster, his dialogue delivery is very poor, from the most wannabe criminal to a lover boy – he couldn’t do justice to the role. Kathmandu connection starts with a tensed scene and suddenly moves to a love story between the criminal, a cop and a television anchor. And unexpectedly, it switches into a revenge tale, nothing seems interrelated and emerges out of nowhere. Though Amit Sial has performed well, but he is scuffling in romantic exchange. His chemistry with Shivani is looking very awkward and plain. There were other loose ends in the series such as:

The series Kathmandu Connection was set in the early 1990’s, when the cell phones were not available, still the communication and flow of information was swift.

Another question, which kept intriguing me, how come an off-duty officers afford a trip to Nepal on the basis of few hunches, without informing the department?

The criminals use their own phone numbers to make calls, which is an irony. Are the mastermind criminals so dumb?

The series is sloppily directed, dragged and lacks enigmatic element. Kathmandu Connection had all the elements, but it turned out to be a big failure. So, if you have nothing to do at home, considering the lockdown you can watch the show. But after a while, the series will lose all the tracks and augments up to nothing. It lacks purpose and clarity with many technical flaws. I couldn’t understand the fact, that someone can make such a mediocre show and escape with it. One needs a lot of patience to see, where the story will take you. Weak subplots, patchy storyline, might make it difficult for you to stick to your chair and watch the entire series.