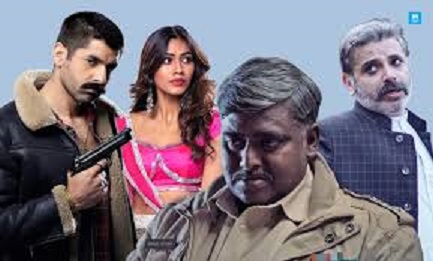 Undekhi – A Sonyliv Crime Web series is a well-created and brilliantly scripted tale that will keep you involved throughout. The crime thriller exposes a nail-biting and startling hunt brimming portrayal of power of the money, exhibition of authority, lopsided ethics and wavering equations. Undekhi is directed by Ashish R. Shukla and created by Sidharth Sengupta is streaming now on SonyLIV, the duo has hit the jackpot and strike a stimulating contrast. It is inspired by brutal mischiefs that occur at weddings. ‘Undekhi’ is the narrative of a powerful family who tries to conceal the killing of a dancer girl, which is a 10-episode series (to be continued) is full of action and retort. The story remains captivating and appealing enough for the viewers to stay tuned.

Undekhi, is set in a luxurious five-star property in Manali against an extravagant wedding environment. The marriage gets jinxed when the drunkard unremorseful father (played by Harsh Chhaya) of the Atwal Family kills one of the dancers. The dancers were tribal girls from Sunderbans (normally referred to as Naxals) who absconded after murdering a policeman there and found shelter in Manali. But, the unexpected happened and one of the tribal got murdered at the wedding, where they were dancing at the uncouth stag bash. The story is all about hiding that murder which involves patriarchy, immoral political control, male supremacist and caste discernment, backs its dreadful head.

The DSP of the Bengal area, Barun Ghosh (Dibyendu Bhattacharya) is on the search for both the girls, was sent to Manali to catch hold the prime suspects in Sarkar murder case of Sunderban, gets entangled in the shootout at the stag party of one of the tribes he is chasing, which is being shielded up by the dominant gun-bearing family.

The character of Ghosh is very interesting throughout the series who loves singing Bengali songs. Bhattacharya has been pleasingly unassuming yet real as the only man standing against the prominent Atwals and an immoral, disobliging police force. Another character which made an impression is daunting and crude Rinku – Surya Sharma, who can go to any extent to guard his Papaji – Harsh Chhaya. Apeksha Porwal plays the role of the tribal girl on the hunt has done justice to her role. The ex-Miss Universe has performed very well and is lucky to get the role of a lifetime. Abhishek Chauhan, a videographer who is the prime witness of the murder has touched the sentiments of the viewers as a fragile but brave city boy who stood for the tribe girl, decides to seek justice and battled till the end.

But the jewel of the show is undoubtedly Harsh Chhaya, who has depicted the role of obtuse Papaji, an obnoxious, infuriatingly unsophisticated, who is joyfully ignorant of the muddle he has spread around. He is wealthy and has power in his hand, the political parties by his side, the police commissioners waiting for his command, who only has one solution to all the problems, Goli maar daange (will shoot the trouble maker).

Each and every episode of the enticing web series, Undekhi ends with a new twist and curl. It will boggle your mind with provoking-thoughts, expecting another disaster and feeling of dismay for Rishi and the tribal girl who are on the run. Other than the crunchy storyline, Undekhi swaggers of solid performances, without any super star acting in it. It has a substantial story, actors who put life into the role and a script that provides balancing fare with a facade of panache and gravity. Freedom and corruption go together in this fast-moving, soberly enthralling tale of a ferociously skirmish of abrasion that comprises of gun-wielding men, murder, sex, extortion, display of power, furtive deals, unethical to the core and a marriage in a threat of getting cancelled.

Although, the series  Undekhi is dark and profound, but Dibyendu Bhattacharya and Harsh Chhaya’s characters, has a fair segment of funny scenes in between the mess happening around. The creators ended it up with an adequate possibility for a sequel and an unsatisfactory cliffhanger which is very distressing as when you get hooked on to a series, you don’t want a gap, it has kind of become a custom these days. The series is worth investing your time – Thumbs up to it.

2 thoughts on “Undekhi, A Must Watch Crime Drama on Sony Liv”