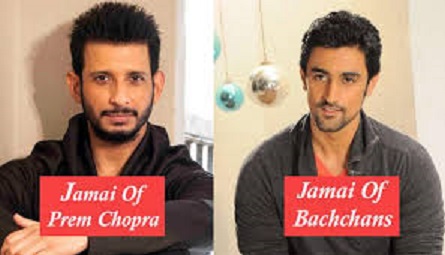 The entertainment industry is flooded with love affairs, the splendid Indian cinema and the Bollywood actor remains in the limelight not just for the acting skill or good looks, but for their relationship as well. The gossip mongers are always interested in what’s happening in their favorite celebrities life, whom are they dating or getting married to? Few B-Town actors have been married to daughters of yesteryear superstars and enjoy the status of being jamai rajas of prominent Bollywood families.  The list may startle you as many of the names never came in the public eye or the media spoke about them. Here are the names of son in laws of celebrated B-town personalities.

The Rang De Basanti actor, Kunal Kapoor is son in law of the Bachchan family. He entered into wedlock with Amitabh Bachchan’s niece Naina Bachchan. The duo dated for 3 years and then tied the knot at Seychelles on February 9, 2015.

Atul Agnihotri who has been part of some super hit movies at the beginning of his career in Bollywood is son in law of Salim khan. He got married to Salman Khan’s sister Alvira Khan.

The blockbuster movie Love Story starrer, Kumar Gaurav is the son of superstar Rajendra Kumar, is married to Namratta Dutt, the daughter of Sunil Dutt and Nargis.

Dhanush is a renowned name in the South film industry and is a son in law of superstar Rajnikanth’s daughter Aishwarya. He debuted in Bollywood from the movie Raanjhana and was appreciated for his acting skills.

The Golmaal starrer Sharman Joshi is a son in law of brilliant actor Prem Chopra’s daughter Prerna Chopra in the year 2000.

Bharat Sahni is a Delhi based well-established businessman. He is a son in law of Rishi and Neetu Kapoor’s daughter Riddhima Kapoor, they tied the knot in the year 2006.

DJ Aqeel is a well-known DJ and is very popular for his remixes and music, tied nuptial to Farah Khan, daughter of Sanjay Khan.

Bharat Takhtani is an established businessman and is married to Esha Deol, daughter of superstars Dharmendra and Hema Malini.

Kunal khemu tied the knot with Soha Ali Khan and became the part of Pataudi family. He is the brother in law of Saif Ali Khan. Kunal is known for his work in the movie Go Goa Gone and Golmaal.

Ayush Sharma is a jamai raja of the strongest Bollywood Khan family. He is married to Salman Khan, Arbaaz Khan and Sohali Khan’s sister Arpita Khan.

Akshay Kumar is considered as the most versatile actors in the Bollywood. He is labelled as “The Khiladi Kumar” in the tinsel town. He is a son in law of Rajesh Khanna and Dimple Kapadia and married to the funny bone Twinkle Khanna.

The Sacred game starrer, Saif Ali Khan is being part of the film industry for close to two decades and tied the knot with super star Kareena Khan in 2012 who is the daughter of the celebrity Kapoor family.

Ajay Devgun is a brand in itself and is counted amongst the top rated actor in the Hindi Cinema. He is married to Kajol, the daughter of veteran actress Tanuja Mukherjee, they both tied nuptials in the year 1999. Why Premarital Counselling is Important?