Metro is a lifeline for people living in Delhi. It takes us from one place to another, it saves time, energy. It is very convenient and safe …………I am going to stop here on the last word “safe”. Are metro’s really safe? Metro officials claim it to be safer for all genders. In case of any eve-teasing, one can contact CISF official or metro staff. Yes, it is safer than cabs, auto rickshaws but incidents do take place. Out of 20, only one girl report for such unpleasant incidents.

Every day women face some kind of Sexual Assault; it is all about the mindset of the people. Sexual assault can be touching inappropriately, staring, making indecent gestures, passing comments, trying to make video, rubbing their private parts. It is very upsetting for women to deal with such incidents on day to day basis. I am going to share an incident happened around me, while I was travelling in the metro.

I was travelling from Rajouri Garden to Vaishali via blue line. It was around 10.00am in the morning and the metro was over crowded (not so peak time but not light as well). There was no seat available in the metro; I avoided taking ladies coach as it had no space. I entered the metro and positioned myself in a way that no one can touch me (the first thing I always do is look for a safer place).

When the metro stopped at Rajiv chowk, crowd started moving out and flooding in as well. An old man, somewhere around 75 or above, walked inside the metro; he was walking very slowly with his head down, came and stood next me. He looked as old as the hills; face completely wrinkled, grey hair with a curve in his back. I still didn’t get a seat but I was thinking if someone can get up for the old man and if no one does, I will ask someone for the seat for him. A man showed his chivalry and gave his seat to him. The old man was carrying a small bag which he kept on his lap.

When we reached Mandi house, another girl came in and fortunately (or unfortunately) she got the seat next to the old man. Since I was not using my phone, I had all the time to observe people. The girl took her ear phones and started listening to the music. I suddenly saw the old man who was holding his bag on his lap, slide his hand and kept on the space between him and the girl, touching her thigh.

I initially thought maybe it was by mistake and he would remove it, but to me surprise he didn’t remove his hand, the girl shifted a little bit side to avoid the touch but the old man shifted too and kept on feeling her thighs. I could clearly make out what was happening around. 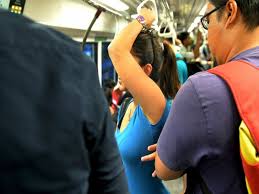 The girl was getting uncomfortable (it was visible on her face) but since he was very old, so she seemed confused thinking is it by chance or deliberate. I am quite sure had it been a young man, she would have told him to keep his hand away, since he was an old guy she must have assumed that how come he can do like this and no one will believe her also. Even I wanted to react, but I was going through the same thought process.

I was feeling disgusted and ill at ease. I also started to ponder, what would I have done in this scenario? After a while, the girl got up and stood near to the exit, the seat was vacant, the old man looked at me with an “eyes of a rapist intention” as if he was telling me you are next. I turned my face and started looking somewhere else. I was not feeling good because he was more than my father’s age and was clearly taking advantage of the fact that no one will believe even if someone will react.

What it leads to, in turn is a bewildered acceptance by the victim as sometimes females don’t know how to act in unusual circumstances. Harassment exists, no one can judge better than a person going through it.

There is no age barrier when it comes to eve teasing and sexual assault. You can be harassed by a young man, a fellow colleague, a neighbor, friend’s father, old man, co worker. It doesn’t matter what the age of the person is, even if an old man does any unwanted thing or you chose not to react. It is still counted as sexual Assault.

I have few mind boggling thoughts in my mind related to the above incident.

Why the girl didn’t speak up? Was it the age of the man which stopped her from reacting? Was she scared that people won’t believe her if she would have stopped him? What a girl should do in such cases where the eve teaser is her grandfather’s age? Would people have supported her?

What she would have done? Please share your comments.

I want to say just one last thing, “Don’t let anyone shame you….stand for yourself”.