ACP Ved Bhushan belongs to Bulandshahar and after 12th studied BA from Meerut University. He appeared in many Government exams such as Staff Selection Commission, UP Police and Delhi Police as well. He was very bright, insightful and intelligent therefore he got selected in both UP as well as Delhi police. Ved Bhushan was a topper of his batch in 1983 staff selection commission exam. SSC is a joint exam of CBI, Delhi police and Delhi Administration joint. But he chose Delhi police as he wanted to be in uniform. He told me once people take Police Officer career as a prestige. 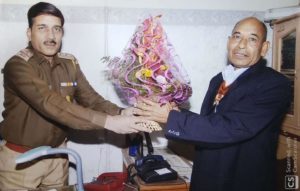 Ved Bhushan wanted to be in Police from a very young age. He wanted to be in a career where he was in the battleground rather than sitting behind a desk in the AC. His focus was purely to help people, make a difference by bestowing citizens with a sense of safety and security. Ved Bhushan loved the recognizable Khaki uniform which had a name tag unveiled on the chest. This attracted him the most and was very proud it. It was not just a career from him; it was his passion, his pride and his aim in life to serve people until he is alive. 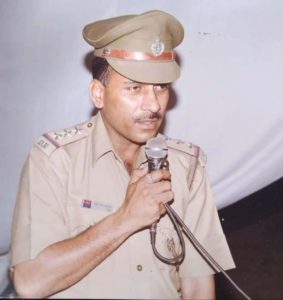 A POLICE JOB IS NOT AN EASY TASK

Working as a police officer is a commendable job. But it is not easy as it seems. There is an extensive training required for hiring process. A Police Officer has to put their life on stack. Law administration is a 24 by 7 job. The long and erratic schedule gets very taxing sometimes. During public holidays rather enjoying with their family, they take care of other’s family. They might not see their family for days and week. There can be a lot of physical and emotional distress. Ved Bhushan never got worried about the stressful part of being a police officer because he knew all this is part and parcel of a police career. The most pivotal part for him was enforcing law and order. He knew the job is more about sacrifice and enjoyed every bit of it. He likes to be in Police Station as he has an opinion that, when a person is on the field in the station it is full of challenges because the decision which one has to take while handling a situation has to be discerning, tactful and helpful in diffusing a situation.

After his superannuation from Delhi Police, he started an institution with the name of Police solutions to support Delhi Police and general public. It is Non – Government, introduced first time in India. A private police is a law enforcement body that are owned and controlled by non-government entities. Additionally, it also refers to an off – duty police while working for a private entity. It also provides consultancy and guidance for police related issues by experienced police officers, senior advocates, scientist/experts, CA. He is not someone who wants to sit and relax after retirement. His motto remains help people till the last day of his life.

Engaging in activities which directly or indirectly support the law enforcement effort in Delhi State and collaborating with other similar or like-minded bodies or organizations in furtherance of the objectives of association:

Ved Bhushan likes to work out in a Gym; this is the secret of his fit body. He likes to eat simple vegetarian meal and also likes to explore new places. WE as a CITIZEN are proud to have such people around us.

8 Ways to Achieve your Goals – Must Read Vivek Mishra – A Remarkable Man who followed his Dreams

5 Ways to Bring Happiness in Your Life Your Day will Come !!