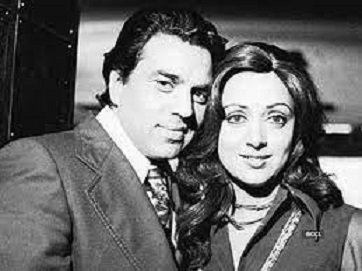 The oldest and most seductive man in Bollywood, Dharmendra Deol, still gets his female admirers weak in the knees. Dharmendra, who has a romantic nature, married two actresses when he was a young man. He even acknowledged that he started dating at the age of 19.

The heartthrob of Bollywood, Dharmendra, was renowned for showing his emotions. Heroines found it impossible to avoid his magnetism on the sets while his movies were working their spell on the big screen. The superstar inspired awe in several actresses of the time. Women used to tremble at the sight of him, even after he wed Hema Malini. Anita Raj was a popular actress who was also the director’s favorite. Dharmendra and Anita appeared in several movies together, and their on-screen chemistry was electric. During this period, Dharmendra developed a close friendship with Anita, which caused some people to wonder. Even worse, he began promoting her to various directors.

His family and Hema Malini soon learned about the entire affair. The entire family bonded together to condemn Dharmendra’s behavior harshly. Dharmendra and Anita quickly began to drift apart from one another.

Even now, the legendary duo from the classic song “Pal Pal Dil Ke Pass” still sounds incredibly calming and lovely. After working on a few films together, the alleged pair got together. Their alleged romance rumors’ spread widely throughout the media. But soon after Rakhee decided to wed the esteemed poet Gulzar, the rumors’ died down. They have now been happily married for more than 50 years.

Meena Kumari, the late beauty queen of Indian cinema, is rumored to have dated Dharmendra. Dharam progressed professionally by using the actress as a stepping stone. While filming for “Purnima,” the two had their first encounter. After that, he continued to work with her on several movies like Kaajal, Main Bhi Ladki Hoon, Phool Aur Patthar, and many more.

One of the highest-paid Bollywood actresses, Jaya Prada, lost her popularity as a result of the toll that life imposed on her. The actress wed a man who had three children, but they quickly divorced due to his first wife. She even temporarily lost the notoriety and reputation she had built up during her whole career. In the midst of all of this, she is also alleged to have been dating Dharmendra. Jaya said that she would feel very insecure and uncomfortable appearing in love scenes with Dharmendra. Both of them worked in several movies, including Ganga Tere Desh Mein, Insaaf Kaun Karega, and others.

The stunning 80-year-old actress decided against getting married after twice coming close. She fell in love with a married guy, but she was not in the mood to be a home wrecker, so she decided to enjoy her life as she did. People mistake this married man for Dharmendra. Their on-screen chemistry was praiseworthy.

Dharmendra and Zeenat worked in the movie “Shalimar” as the first pair to produce an international film in India. They worked on a few movies, including Katilon Ke Kaatil, and Alibaba Aur 40 Chor, and a few more. Following their appearances in these movies together, they became quite close. However, neither of them has officially denied the relationship rumors’.

Dharmendra and Mumtaj, one of the most popular couples of the 1960s and 1970s, recently became viral on social media when Mumtaj and her sister visited Dharmendra’s home. Both of them were cordially greeted by Prakash Kaur. They spoke for hours, sharing stories about their earlier days in Bollywood.

Dharmendra performed a screen test for the Bollywood film “Love in Simla” as Sadhana’s first hero. He was, however, turned down for unspecified reasons. However, the rumored off-screen approval quickly replaced the on-screen denial. The public adored the couple’s performance even though they only appeared in one movie together, “Ishq Par Zor Nahin,” during their career.

Rekha, the most adored old-school Bollywood actress, decided to remain unmarried despite having had several failed relationships in the past. She charmed everyone, including Jeetendra Kumar and Akshay Kumar, with her timeless beauty. Dharmendra is somewhere on the list as well. The news networks often feature two of the most popular people for having an affair.

Such films like Lalkar, Aankhen, Pooja Ke Phool, and Anpadh featured this lovely duo. After working on these films, they rose to fame. They did not say much about the purported relationship. But the viewers were perceptive enough to draw connections and draw their conclusions. But after their first few films together, the actress got married to a Nepali man, which put an end to the rumors.

Even though they only appeared in one film together, “Loha,” the audience began to assume things. After appearing in “Ram Teri Ganga Maili,” she began to be viewed as a sex icon in business. But she married a Buddhist monk after having a massive romance with the criminal Dawood Ibrahim.

Even a superb performer like Dharamji could not escape the timeless beauty of Waheeda Rehman. Following his viewing of the movie “Chaudhvin Ka Chand,” he was likewise enamoured with her beauty. Waheeda revealed in a reality show that he is a flirtatious man at heart. Dharmendra said that he was often the target of such accusations. He continued by saying that there was a disturbance after seeing Waheeda in Chaudhvin Ka Chand. She captivated everyone, even Dharamji. When Waheeda was asked about her crush at a show, she said, “Dharmendra.” I wonder what occurred when I claimed I had a crush on her too,” Dharmendra said.

These factors all strongly suggest something. They worked in movies like Sunny, Ghar Ka Chiraag, Man Ki Aankhen, and other films.

For films like Watan Ke Rakhwale, Phool Aur Patthar, Man Ki Aankhen, etc., two of the most well-known personalities teamed up. Even after the shootings, the two immediately began to appear together. There were rumours that they were dating. Additionally, he claims that taking off his shirt worked wonders for both the movie and him while commemorating the 54th anniversary of “Phool Aur Patthar”.

The spouses of two of the happiest married couples appear to have started having feelings for one another at some point. There is no way to discuss Jaya Bachchan and Dharmendra without mentioning their most well-known movie, “Sholay.” In truth, the movie depicted two real-life couples. In real life, just as in Jaya’s portrayal in the movie “Guddi,” she was captivated by Dharmendra’s moody demeanor. She also disclosed that she intended to star opposite Dharmendra in Sholay as Basanti, a part that was first portrayed by Hema Malini, on the reality series “Koffee with Karan.” In front of Hema Malini, she also professed her love for Dharmendra by stating this.

Last but not least, Dharmendra managed to attract Laxmi Chhaya’s attention. They both worked on several films, like Aya Sawan Jhoom Ke, Dil Ne Phir Yaad Kiya, Dhoti Lota Aur Chowpatty, and others. The public never had access to adequate information about them.

16. HEMA MALINI AND DHARMENDRA: Happily, Ever After

Dharmendra lost his heart to her even though he was already married to Prakash Kaur and had two boys. Because Kaur refused to divorce Dharmendra, Hema and her parents were initially dubious of his first marriage. However, Hema accepted his proposal while shooting for their movie “Sholay.” Dharmendra became so madly in love with her that he even converted to Islam, a religion that permits having two wives. We learned from the couple that love drives people to do insane things for one another.