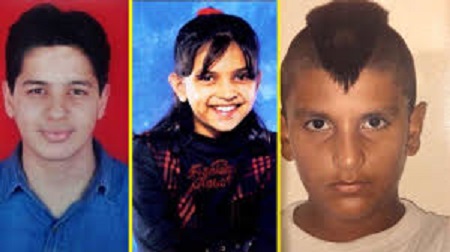 The Bollywood Celebs who have won our hearts with their talent and charisma were, once tiny packs of attractiveness and innocence. Here are a few pics of your favorite celebrity along with their delightful childhood memory picture.

Deepika Padukone is one of the highest paid and an established Bollywood actress. She made her debut along with Shah Rukh Khan in the movie Om Shanti Om in 2006, which gave her wings to fly and soon she was flooded with lots of movie offers from all the biggies of the B-Town. She started her career as a model and also appeared in many TV Ad campaign.

Shah Rukh Khan, also known as Baadshah of Bollywood and King Khan made his debut in 1992 with the movie Deewana. He also made several appearances in Television shows like Circus and Fauji. He has the proclivity of responding to the most controversial question with witty replies.  His waggishness and intellectual humor are sure to be a tête-à-tête starter.

Priyanka Chopra, was launched in the movie The Hero – Love story of a spy in the year 2003. She is very popular in the US for her role as Alex Parrish in the show Quantico. She made the nation proud by winning the title of Ms. World in the year 2000.

Amitabh Bachchan, made his acting debut from the movie Saat Hindustani in 1969. The words will fall short for anyone to talk about Big-B. He is an epitome of talent and hard work. At the age of 77, the actor is matchless and unstoppable. He has delivered exceptional performances over the year and has sailed through various demanding roles.

Akshay Kumar’s first movie as a lead actor was Saugandh which got released in the year 1991. He is famous for his versatility and the kind of scripts he chooses, which has made him the top rated B-Town celebrity. He is one of the fittest actors in Bollywood.

Ranbir Kapoor, began his career from the movie Saawariya in 2007. No doubt, he is a talented actor, his movie Barfi by far is the best performance till date, in which he played a hearing impaired man. His role in Rocket Singh earned him a lot of praise by the audience and the critics.

Ayushmann Khurrana, anything this guy touches becomes gold. He made his acting debut in the movie Vicky Donor in the year 2012. He was part of the reality television show MTV Roadies second season. Ayushmann has given some remarkable performances in the movie like Dream Girl and Article 15.

Aamir Khan, debuted in Qyamat Se Qyamat tak in the year 1988. He is amongst the most influential actor of the Bollywood industry. He is an actor par excellence and is known for his impeccable acting skill, who portrays intense narratives with ease and perfection.

Ranveer Singh, made his debut in the year 2010 with the movie ‘Band Baaja Baaraat’. His boundless energy is infectious. He has won millions of hearts with his talent and skills.

Hrithik Roshan, was launched as a leading actor in the movie Kaho Naa Pyaar hai in the year 2000, which turned out to be a blockbuster and shaped his career. His role in Kaabil gave him the label of “Power house of Talent”.

Taapsee Pannu is one of the most brilliant and diligent actress in the Bollywood industry at present. She has impressed the audience with the kind of roles she has portrayed be it a 15 minutes’ screen presence along with the biggies of the tinseltown. She made her acting debut in Bollywood with the comedy movie Chashme Baddoor in the year 2013.

Alia Bhatt is an effortless actress and has created a benchmark as far as her talent is concerned. She is blessed with a beautiful voice and has amazing acting skills. She was launched by Karan Johar in the movie Student of the year 2012.

Vicky Kaushal’s first movie was Masaan, which was released in the year 2015. He is the next big thing in Bollywood. His role in the movie Razzi was much appreciated and won a place in the heart of the audience.